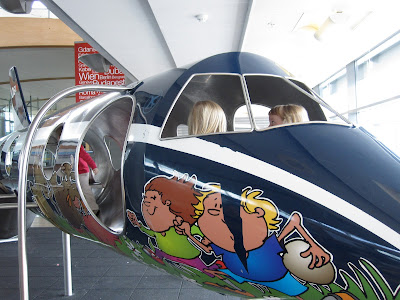 If you look at the date on this post, you may wonder why I'm only now writing about heading home. Well. Let's just say that life has sped up since our arrival back on U.S. soil, and I'm only just now getting back to this blog. We arrived at the airport with our 14 (!) checked bags and 7+ carry on items with the help of our dear neighbor, S. He bought our old red van, let us drive it right up until our departure date, and then drove the Professor and our luggage to the airport. Thanks S!! The kids and I were dropped off at the train station and took the airport express train. This was something the kids had looked forward to all year--the train goes through our local station but doesn't stop, so we had taken to calling it "the fast train." It's also a newer style train so looks really cool! I'm not sure the actual ride lived up to expectations, but we made it. S and the Professor were going to pack all the luggage into our van (no room for both luggage and passengers), but when they pulled up at the airport they were in S's motorhome. They decided to take the vehicle they knew had space and save the hassle of careful packing. Talk about a spectacle!! We waited forever in line to check in, but really the flights went very smoothly.

When we arrived back in the US, we wheeled all our bags toward the exit where the customs inspectors were and made quite a parade with about five carts. The inspector did a double-take, asked, "are you all together?" and then just waved us through. He did not want to even get started with our crew! We had grandparents to meet us with our vehicle and trailer, a bed and breakfast waiting just an hour away, and then the drive home. Thanks to friends here at home the house was all cleaned up and ready and even had breakfast and lunch fixings in the refrigerator. It was great to be home again.
Posted by Sabbatical Wife at 7:48 AM No comments:

One of the special stops we made in Sweden was to a small open-air museum at Åsle, which features a cluster of old homes which have been preserved and displayed with period furnishings. This particular museum is somewhat unique, because they have been able to buy the land and houses and keep the whole little neighborhood intact in its original site. For us, it was extra special, because the Professor's great-grandfather was born and raised in one of the houses that is still preserved.

Here are some excerpts from the material provided by the museum:

"During former centuries every village of farmers had a common pasture, where the cattle were watched by a shepherd. Very near the village there was a place where the cattle were collected every morning, and every evening they were brought to their owners by the shepherd. This place was generally situated near a water-course, while the farms were situated higher up.

"At this common place poor people were permitted to build their small log cabins and to cultivate small gardens. In this way, housing areas for poor people were founded beside the villages. Here different sorts of craftsmen, dismissed [retired] soldiers, and widows settled down. They had to earn their livings by working at the farms as long as they had strength and after that trust to the charity of other people.

"The poor people's housing area at Åsle is situated by the water course Kolaforsen, which once ran three small mills. The first log cabins were built in the 18th century. The village had its biggest extension in 1880 with 20 cottages and 85 inhabitants. After the village was empty in 1920, it was taken over by the local preservation society, which has repaired the cottages in order to preserve this unique settlement from destruction. . ." 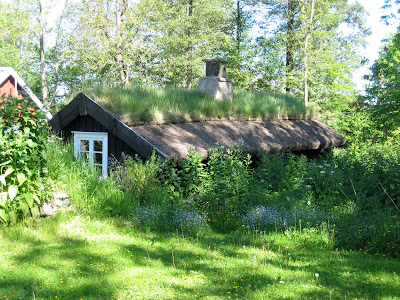 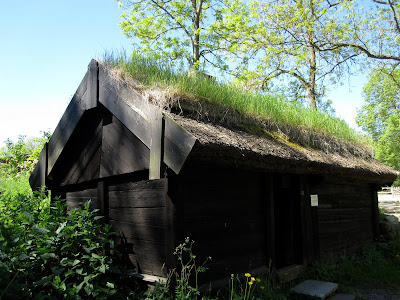 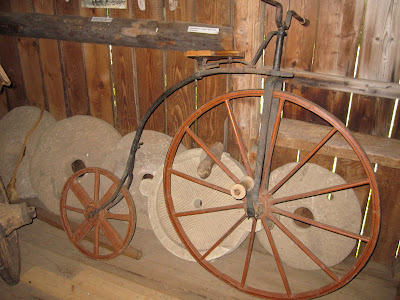 Posted by Sabbatical Wife at 5:29 AM No comments:

Arriving back in Stockholm early in the morning, we were met by one of the Professor's cousins (third cousin, or second cousin once removed, something like that!) We had a really fun breakfast with his family at their house boat just outside Stockholm. It is a real house, built on a concrete foundation, but it floats in the marina where it is permanently moored. It was such a lovely space, and the morning was clear and bright, just right for being on the water. We had a fun time getting to know them better.
Leaving Stockholm, we hit a major traffic jam that kept us at a turtle's pace for well over two hours. However, once we got through all that, we enjoyed our drive down to the southern part of Sweden. This is the general area where most of our relatives (on my side as well as the Professor's) originally came from before immigrating to the U.S. We didn't have any contacts for my side of the family, but it was fun to see what the land looked like. We really couldn't get over how much similarity there was to the upper Midwest of the U.S. where those ancestors ended up. Iowa, Illinois, Wisconsin all would have seemed quite familiar as far as the lay of the land. We saw lots of farms in this area that could easily have been transported to the Midwest, except maybe for the style of the farmhouses. 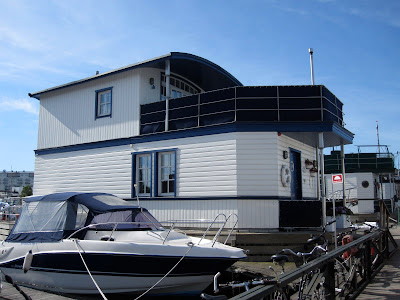 Posted by Sabbatical Wife at 6:19 AM No comments: 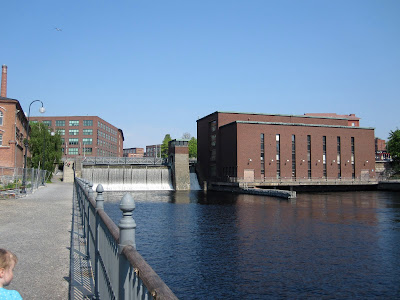 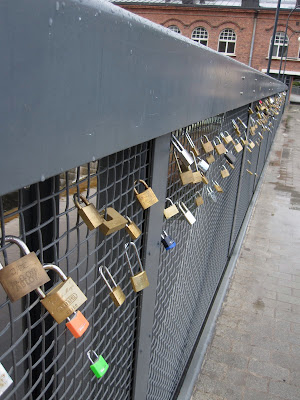 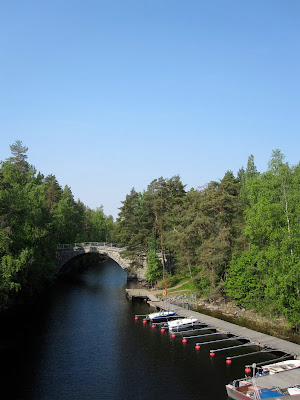 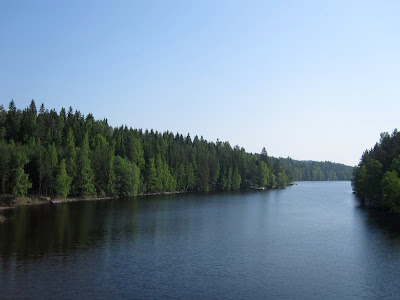 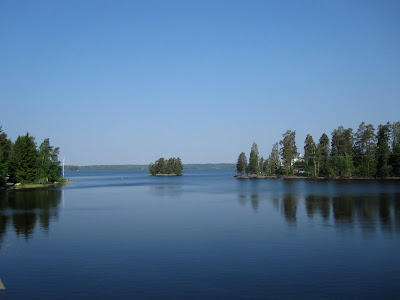 Posted by Sabbatical Wife at 12:31 PM No comments:

Our first stop in Finland was the port city of Turku. This is actually the oldest city in Finland, and was once the country's capital. We recently heard that Helsinki was made the capital in the early 19th century when Russia took control of Finland from the Swedes. The Russians decided that Turku was too close to Sweden and thus too much of a risk, so opted for Helsinki, which is further to the south and east! (That's my very informal history via Finnish friends--you'll have to fact-check that yourself!)

We were met in Turku by second cousins of the Professor's mother, and we were well taken care of by our Finnish guides. In addition to some sightseeing, we were able to meet many of the 3rd and 4th cousins from this branch of the family. It was particularly fun to see our kids connecting with their Finnish relatives, forging some friendships we hope will continue the trans-Atlantic connection!


Posted by Sabbatical Wife at 11:30 AM No comments:

On Board the Ferry

From Stockholm, we took the daytime ferry to Turku, Finland. While it was a bit of a long, slow day for us, it seems to have been quite a memorable experience for the kids. The two youngest still talk quite a bit about our trip on the big boat. Leaving Stockholm, we travelled through the archipelago of islands for almost two hours or more. There was actually very little time out on the "open sea" of the Baltic before entering the archipelago of islands off the coast of Finland, so it made for a lovely journey. Of course, we also enjoyed the shopping on board, the kids' play room, and also taking a nap in the bunks in our family stateroom. We boarded the ferry at 6 am, which meant we had been up and driving before 5 am, so it was a long day.
On our return trip, we took the evening ferry and were able to sleep most of the way, again on bunks in two adjoining staterooms. We stayed up for the kids "floor show" in the evening, and a little shopping, and then were pretty quickly in bed and asleep despite the partying going on elsewhere on board. 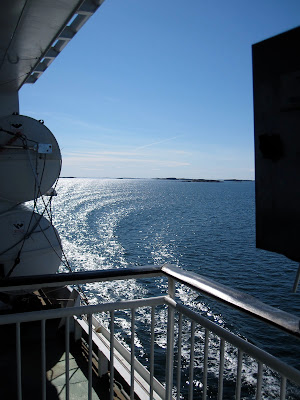 Posted by Sabbatical Wife at 1:29 PM No comments:

I have been neglecting this blog terribly in the past month. After our two week trip to Sweden and Finland, we had over 800 photos to sort. We also were in the home stretch for finishing school and starting to think about packing to go home again in July. Whew! But, I did want to include some photos of our travels, so here are some very brief highlights.

Our first stop was Stockholm, Sweden, where we spent two days sightseeing. The Professor and I spent a week here in the 1990s and enjoyed our time immensely. This trip was equally enjoyable, but traveling with five children is not at all the same as being there as a young couple! We spent two long days, but still didn't even begin to see everything that we wanted to visit. 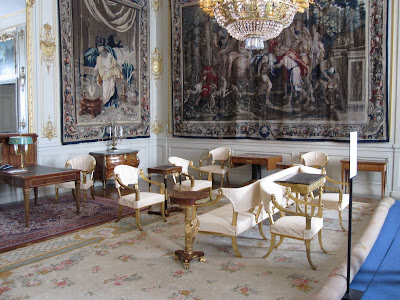 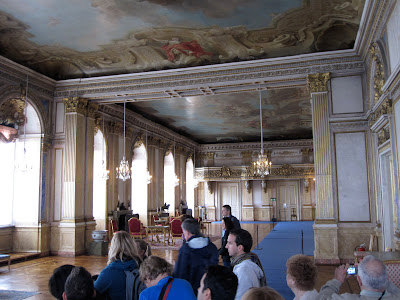 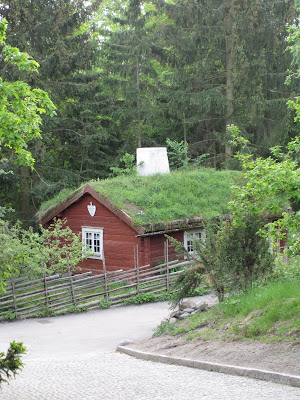 Posted by Sabbatical Wife at 1:22 AM No comments: 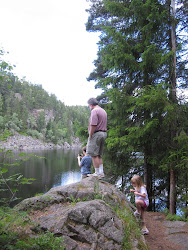 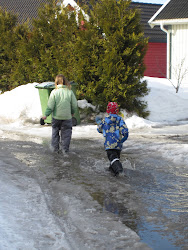 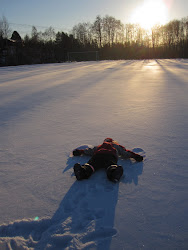 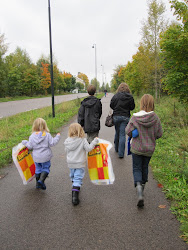 Sabbatical Wife
A willing partner in this adventure, I'm in charge of the logistics of moving a family of 7 across the Atlantic for an 11 month immersion in Norwegian language and culture. 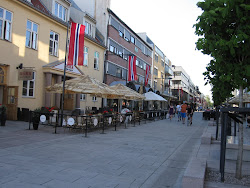 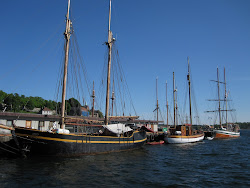 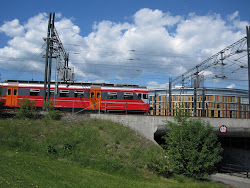